Home   /   A Sine of the Times: Berlin’s most minimal record

A Sine of the Times: Berlin’s most minimal record

When it comes to having your ribs rattled by low frequency sine waves blasted through subwoofers, some people are clearly more comfortable with the experience than others. Last night in Berlin’s St. Johannes Evangelist-Kirche, visitors walked around the cavernous, century-old church with a mixture of fascination and disconcertion at a sound installation called WOW.

A project of sonic artist Carl Schilde, co-founder of sound art duo Heavy Listening, WOW takes the notion of minimalism to a new level – a formidable feat considering Berlin’s penchant for the theme. But this is not minimal as in a subgeneric musical prefix: this is an artistic experiment that reexamines the meaning of the term, questioning preconceptions of music itself.

Ostensibly a record launch, the event was a far cry from the usual Berlin party – but this is no ordinary record. WOW is a vinyl that contains a single sine wave whose ultra-low frequency is directly proportional to the speed the record is played. Play the record at 33 1/3 rpm, for example, and you hear a tone of 33 1/3 Hz. Speed it up and the bass tone you hear is higher. As these frequencies are close to the lowest levels of human hearing, the effect of listening to them at high volume is somewhat overwhelming, and the sounds can be felt as much as heard. 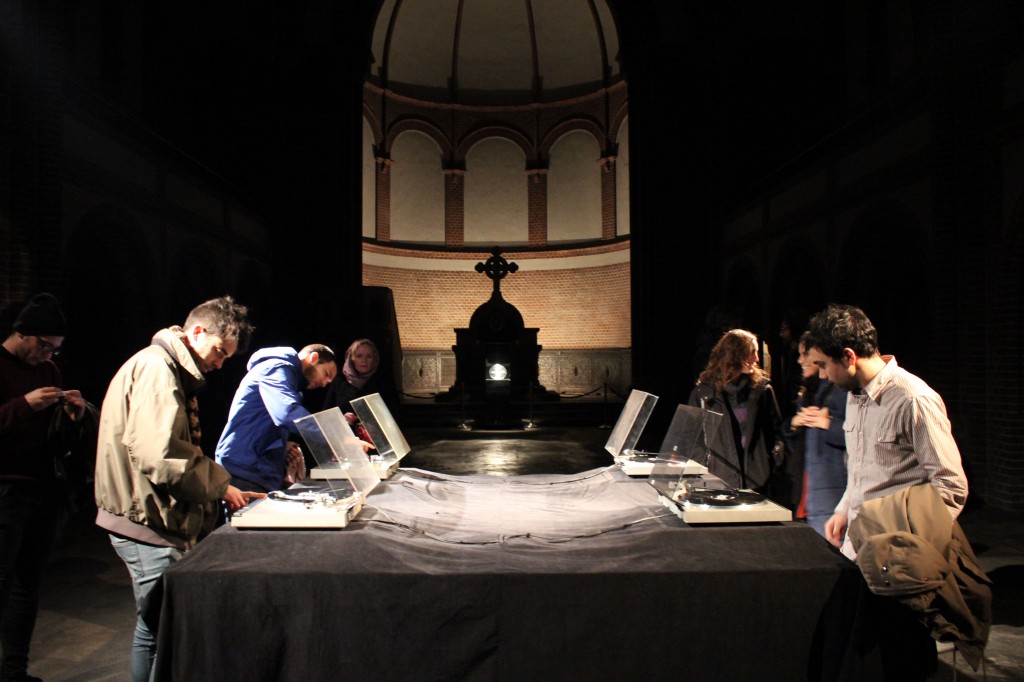 It’s no surprise that a handful of visitors to the one-night-only installation didn’t seem to overly enjoy the experience. Feeling your body vibrate and your hearing engulfed with unfamiliarly low and seemingly deafening pulses of sound probably sparks some kind of instinctive panic: it’s rare that you’d hear a noise like this in any other situation and not be in danger. Still, it’s exactly this singularity that also made the installation interesting and exciting – especially as there was not one but four WOW records being played at the same time, and people could affect the sound by adjusting the records’ speed.

The combination of multiple sine waves of differing pitches being played simultaneously resulted in an effect called rhythmic modulation. When one sound wave is at its positive peak and another is at its negative, they temporarily cancel each other out. Conversely, when they shift out of sync and both become aligned in a positive peak, the volume is doubled. The outcome is a steady beat of incredibly low sounds; a hypnotic rhythm that last night vibrated through the church and the people inside, creating the wonderful illusion of a huge, communal beating heart.

A key element of the installation, however, was to let people play around with the sound to experience how their presence, actions and movements affect it, resulting in noise that more often than not resembled uncomfortable palpitations than a relaxing regular pulse. But the opportunity for experimentation is the key to WOW, and interaction was an essential part of the installation. The whole point of the record is that it turns your record player into a musical instrument, reacting to its unique idiosyncrasies and placing them at the centre of a unique sonic experience.

Though by no means an original installation – Schilde’s former tutor Robert Henke recently staged something similar, as did Japanese artist Ryoji Ikeda – WOW’s innovative angle is that it’s not just an event, but also a tangible product that people can buy into and take home to turn into their own, very personal experiment with sound and music.