If the walls of Zentrum Kreuzberg could talk, their tale would be forlorn. Built between 1969 and 1974 and initially named the Neue Kreuzberger Zentrum (NKZ), the building comprises sprawling concrete blocks that form an angular semi-circle eight stories high at Kreuzberg’s Kottbusser Tor (known to locals as Kotti), in what was then West Berlin. A mixture of residential and commercial space, Zentrum Kreuzberg is today home to around 1000 residents, with the ground and first floors given over to shops and exhibition space, some of which remains empty and unviable to this day. 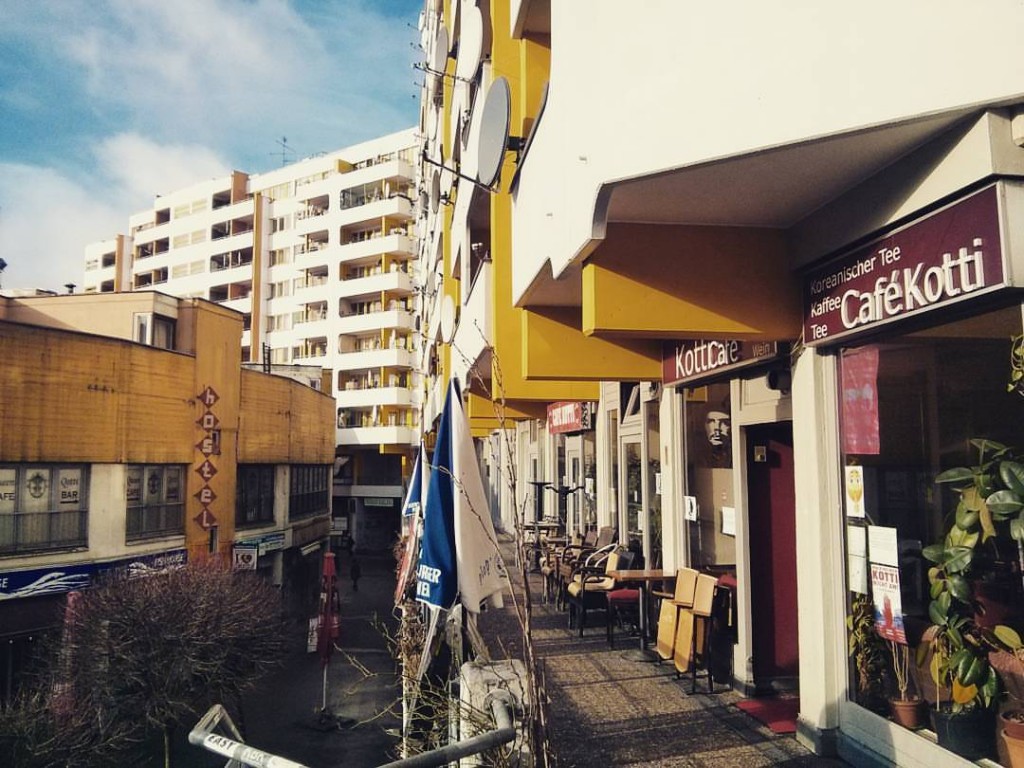 Since the end of the Second World War, West Berlin had itself been the star of an increasingly sad and solitary story; an island of western democracy set deep within the Soviet-controlled East, its ideological isolation finally made tangible in the form of that famous and terrible Wall.

The NKZ was essentially born of this beleaguerment, a product of neither housing necessity nor viable finance, but of politics pure and simple. A child of the ruling Social Democrats’ Bauwirtschaftsfunktionalismus (literally: building economy functionalism) policy of the late 60s and early 70s, the structure was part of a citywide “demolition and renovation” drive that discounted the value of old, existing housing in favour of representing political and economic strength by rebuilding from scratch. The building’s blockade-like shape is no accident: it was planned as a sound barrier to a proposed motorway that was to cut through the city less than half a mile to the north. That plan, as with many others that would have made the monolith less of an architectural outsider, were never realised.

Architects Johannes Uhl and Wolfgang Jokisch’s original plans were a blueprint for modernist Utopian visions of the time, with light, airy space and a shape and position that maximised efficient flow of motorised traffic. Indeed, the building crosses the major thoroughfare of Adalbertstrasse, creating a towering gateway and cutting off Kotti from the historic Luisenstadt quarter straddling the border with nearby Mitte. Following the functionalist philosophy of progress through technology and growth, and the furtherance of society through contemporary industrial practices, the NKZ was intended to include a bright marketplace, onsite kindergarten, a rooftop terrace, reading retreat and play area. None of these features were realised, however, because the project was never a viable financial investment.

The government attracted investors to the project through tax breaks, in keeping with its general policy of growing the economy by enticing businesses to the city. Financiers funded the project almost solely for these tax breaks and not because it was an attractive investment. As such, the NKZ went bankrupt in 1978, just four years after its completion, requiring substantial state subsidies for decades to come.

From a symbol of prevailing optimism, the NKZ’s fall from grace was swift and total. The shortcomings in the project’s realisation and its financial failure led to a rapid change in public opinion and a swathe of protests against the urban planning practices the NKZ represented. By the end of the 70s, squatters had moved in to the majority of the remaining old buildings in the area, putting an end once and for all to this paradigm of urban regeneration.

Aesthetically anomalous and now with no hope of similar company, the Neue Kreuzberger Zentrum was an outsider from the start; both product and emblem of an isolation that infiltrated deep into social history past and future. Before the NKZ was even conceived, Kreuzberg itself was a geopolitical peninsula, penned in on three sides by the Berlin Wall, a preserved pocket of the West; home to a host of migrant labourers from across Eastern Europe, many of whom decided to stay once their post-war work was through. The area around Kotti became the heart of a thriving Turkish community, and the cheap rents offered by the NKZ building attracted mostly migrant residents.

Even since the fall of the Wall in late 1989, when Kreuzberg suddenly found itself in the middle of the city again and started attracting a much wider variety of people, the still-subsidised NKZ maintained affordable rents for its existing tenants and remained a symbol of the complex socio-political conversation about acceptance and integration whose echoes continue to haunt Germany.

Moreover, the perfect storm of dark, secluded spaces left over from the architect’s unrealised plans and the intersection of two major metro lines—the north-south U8 and the east-west U1—made the NKZ and the area immediately surrounding it a magnet for drug use, homelessness and related crimes, with services such as a needle exchange springing up soon after. Commercial spaces in the lower part of the building remained unrented and increasingly undesirable as the decade saw the area develop into a crime hotspot, culminating in 1998 when several prominent politicians called for the NKZ’s immediate demolition, labelling it an “urban disaster”.

Instead of destruction, however, the government decided to take a constructive approach to the architectural thorn in its side, appointing Peter Ackermann—a figure involved in the building’s management since 1976—as the project administrator and manager. With a final influx of public money, Ackerman consulted with locals and residents to improve the building, renaming it Zentrum Kreuzberg and eventually managing to turn it into a commercial business independent of subsidies by the mid-2000s.

This infusion of hope sparked in the building’s residents an ongoing commitment to cleaning up its image, including attempts to oust the homeless community, who many regarded as outsiders. Though this issue raises a number of questions s it undoubtedly demonstrates a growing sense not only of pride but also a confidence in the political agency of ethnic minorities. Additionally, much of the empty space on the first floor—initially planned for commercial use but never viably developed—is now given over to art exhibitions and the like. One of the ground floor spaces—Möbel Olfe, a former furniture store—is now a popular gay bar.

Though this seems like progress, people have begun to question its positive impact. As the capital of Europe’s strongest economy, Berlin is quickly catching up with its national and international urban peers. The cheap rents of Kreuzberg that have long attracted artists and immigrants alike are rising rapidly in response to increasing demand for accommodation in the area. Once well off the beaten path, Kotti is today wide open to sweeping gentrification. As is the case in so many scenarios of conflict, new outside enemies change the status of existing hierarchies and alliances, bringing together former adversaries in the fight against a new threat.

Yet Kotti is currently getting some bad press. Maligned as a “no-go zone”, the area continues to suffer from its status as an outsider, with troubling assumptions about its “multicultural” makeup played out in the media. As resident communities come together to resist the displacement and homogenisation of gentrification already seen in other parts of the city, as well as damaging stereotypes fuelled by anti-immigration rhetoric, Zentrum Kreuzberg—ever divisive— has again become a symbol: of resistance and diversity on the one side, and of fear and difference on the other.

An earlier version of this article appeared in a print issue of TREMORS magazine.