Visiting the Ghosts of Gone Birds

It’s a cold, crisp December morning and my anticipation grows as I reach my destination. The seagulls are squawking, the blue tits are hopping, but I pass them by, bound for an avian encounter of a much rarer kind. Stepping inside Brighton’s ONCA gallery, a dodo looks on from a distance and a caracara hops up from behind. Like something out of a Carrollian dream, I’m haunted by the presence of unfamiliar creatures: the Ghosts of Gone Birds are all around.

According to Birdlife International, 1,313 bird species are considered at threat from extinction. For many, such statistics, whilst sobering, lack the visual and emotional impact to truly engage them with the reality of the figures.  Ghosts of Gone Birds, set up in aid of BirdLife International’s Preventing Extinctions Programme, is a collaborative, multimedia art exhibition involving hundreds of painters, sculptors, writers, musicians and more, who have come together to “breathe life back into the bird species we have lost, with the aim of protecting those on the brink of a similar fate.”

After successful shows in Liverpool and London, the exhibition migrated south at the start of November, finding a perfect nesting place in the newly opened gallery.  Since the exhibition launched, ONCA has held a number of events, attracting a diverse and enthusiastic audience from the very young to the more mature, each encouraged to use the space to develop their own art, whether that be a poetic musing on the symbolism of owls or a painting of a long lost exotic bird.

On first entering the gallery, the visual impact is impressive. You rarely see as numerous and diverse a range of artistic styles and materials on display, and in concept this could be considered a little overwhelming and ‘busy’. However, the show is movingly curated to display the diversity and beauty of so many captivating birds, and the crowded space provokes strong emotions. As gallery assistant Fanny Richard pointed out, “The power of all the pieces together is what makes the exhibition is so effective.”

Ghosts of Gone Birds seems to have been made for the ONCA gallery, whose owner Laura Coleman wants to “use art to think about how the environment is changing” and to create a collaborative and interactive artistic space where people can truly engage with conservation issues. 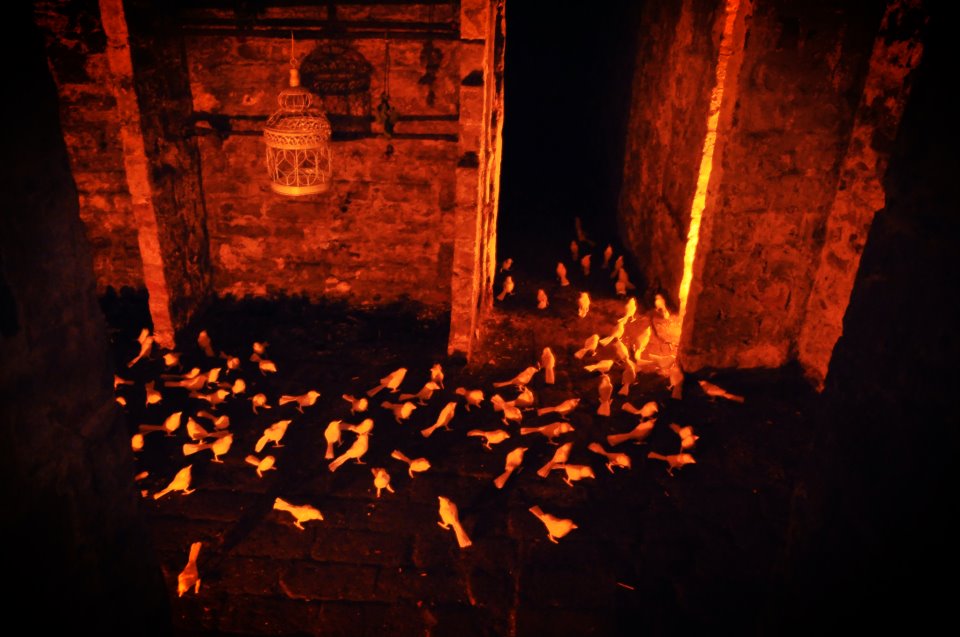 The exhibition is fluid and evolving and is currently in its second phase, with contributions from creative artist Maxine Greer, musician and producer Richard Norris, artist and costume designer Georg Meyer-Wiel and many more. All responded to the brief of creating a piece of art to represent and celebrate an extinct or threatened species of bird with their own unique perspectives, backgrounds and visionary styles.

Brandon Lodge’s brush and ink pictures are personal portraits, which seem to display the distinct personalities of his individual subjects, namely Red Rails, Guadalupe Caracaras and Snail Eating Couas. Others, such as artist Barbara Ana Gomez, take a more symbolic look at the threats facing birds, with her comical print of a bird with it’s head stuck in a KFC Bucket, entitled Oahu ‘o’ and The City. With the work of emerging artists and students displayed alongside the internationally renowned, such as British cartoonist Ralph Steadman, the exhibition has given anyone with the passion and talent to express their thoughts and feelings on ornithological conservation, leading to an impressive and thought-provoking collection of work.

The gallery is planning a number of events before the exhibition takes flight at the end of January, including a puppet show in collaboration with the Feral Theatre on 10th and 11th of January. Before then, crowds are being drawn in with a wonderful window display based on an advent calendar and consisting of 24 bird boxes, with one opened each day to reveal a feathery surprise. 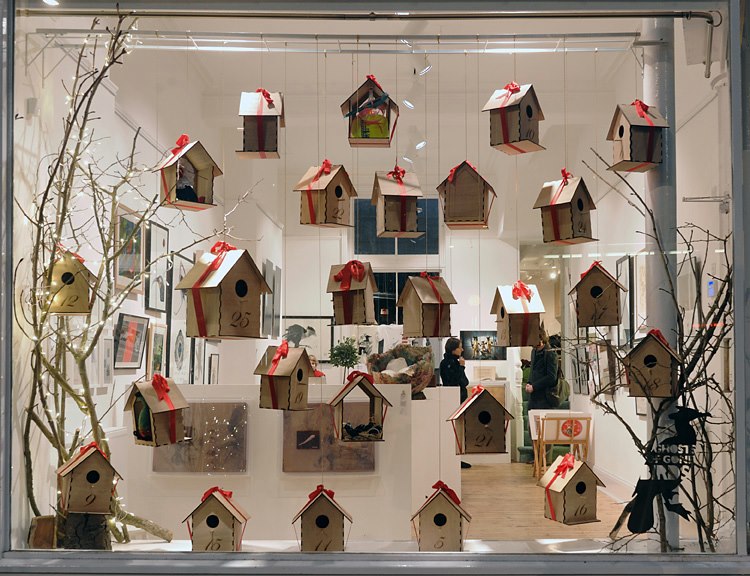 Before I go, I’m honoured to be given the chance to pop open bird box number 12, uncovering a beautiful Marvelous Spatuletail glistening in the winter sun and greeting its newfound fluttering friends. But soon enough, it’s my turn to take off.  Leaving the gallery I notice, for the first time in a long time, the songs and squawks of the birds I share my city with, finally able to forgive the seagull that stole my chips.

Ghosts of Gone Birds is on at the ONCA gallery until 31st January 2013.

Robyn Holmes graduated in social anthropology and cultural studies and has lived and worked in Brighton for ten years. Currently working in the education and charitable sectors, she enjoys spending her free time engaging with local projects or travelling further afield to indulge her interest in art, literature and culture.