Haus der Kulturen der Welt: Mediating the local and the global in Berlin 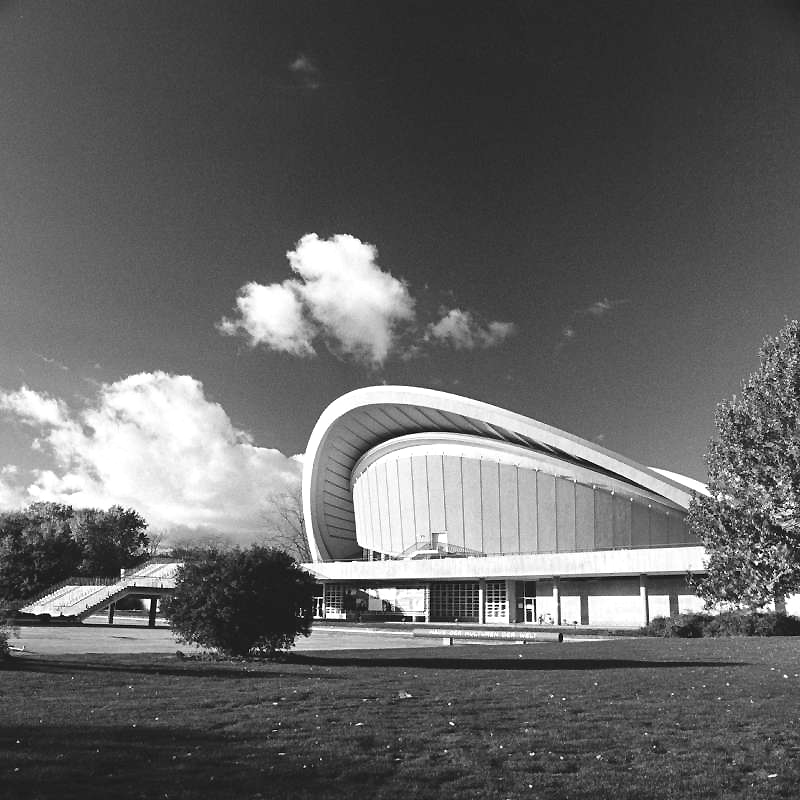 How often Newton’s third law of motion –that for every action there is always an equal and opposite reaction – seems to apply to the least physical aspects of life. Socio-politically, 1989 was a landmark year for Berlin, and the whole of Germany, with the fall of the Wall symbolising the collapse of years of oppression and the beginning of a new era of freedom and hope. It was also the year that the Chinese government massacred demonstrating students in Tiananmen Square. In South Africa, F. W. de Klerk was elected, sparking the beginning of the end of apartheid, and in Afghanistan the Soviets started to withdraw, igniting a new phase of civil war.

It was in the context of this tempestuous temporal juncture that the Haus der Kulturen der Welt – or House of World Cultures – was founded in Berlin. Truly a child of its times, the HKW was conceived, both physically and curatorially, as an artistic and intellectual intersection between Berlin and the rest of the world. The institution describes itself as a place of international exchange, and takes seriously its role in sparking conversation between people –’people who, despite geographical, political or social divisions, are joined by common questions and challenges’. Citizens from across the world now call Berlin home, and with immigration to the city ever-increasing, the HKW provides a vital platform for intercultural, creative exchange, learning and problem-solving.

Due in part to the depths of its historical roots, the HKW, in its role as a cultural mediator and global gateway, today towers above other cultural institutions of its kind in Berlin. Not that there are many others like it. “The Haus der Kulturen der Welt is completely unique”, Silvia Fehrmann, their Head of Communications, explained to me recently. “Berlin is unlike any other city. Because of its divided history, it has two or even three main theatres, two zoos, and so on”. Until quite recently this was two cities, not one.

Rising from the Wall’s rubble as one of reunified Berlin’s first new cultural institutions, the HKW is, according to Silvia, singularly placed to mediate the local and the global: at once a symbol of unity and arbiter of diversity, even –and especially –as the lines between the global and local become blurred.  But what really makes the place unique is what happens inside. Neither theatre nor gallery (but possibly both), the Haus der Kulturen der Welt is an original space for artistic, intellectual, philosophical and scientific dialogue in the form of exhibitions, interactive projects, workshops, lectures and symposia.

This year, for example, the venue plays host to the International Literature Prize, the Berlin Documentary Forum, and the now world-famous Transmediale digital arts and music festival. Then in September, in typical self-reflexive style, the HKW will address ‘the architecture of the former congress hall and the history behind it from the focal point of Art, Architecture and Ideology’, in a project entitled Between Walls and Windows.

In 1989 the winter of Berlin’s discontent ended and new institutions began to bloom in a cultural (and, 23 years later, apparently perpetual) spring.  For the HKW, though, like many other places and movements at that time, the seeds of change had been sown long before; its roots inextricably intertwined with the history of the building and the city itself.

Built over thirty years earlier, the building started life as the West Berlin Congress Hall.  Designed by American architect, Hugh Stubbins, as the US contribution to 1957’s International Building Exhibition (which also saw the reconstruction of the nearby Hansaviertel district by some of the era’s most renowned international architects), the iconic structure is located on the banks of the Spree at Tiergarten’s northern edge.  Stubbins, who was familiar with Germany, having studied under Martin Gropius at Harvard, wanted to make a statement against the sinister paranoia of the Cold War. To some, the structure, built atop a man-made mound, was a beacon of freedom and unity reaching out to the East. To others, it was merely a move in the ongoing game of East-West one-upmanship; another subtle facet of that most curious and cynical war of nerves.

Clearly an optimist, Stubbins himself described the structure symbolically as ‘completely free’.  Indeed, the uniquely shaped edifice, with its curved sides and soaring roof, is evocative of a set of wings, and in Stubbins’ view upheld the ideal of intellectual freedom. Such sentiments laid the foundation for the future HKW’s fate, and further building blocks were added when, shortly after completion, the Congress Hall was given to the city of Berlin by the US in a gesture of cultural and political support.

The striking external architecture envelops an equally impressive interior, with a dramatic central auditorium that seats just over 1000 –a feature that patently influences the type and scope of events that are hosted here. There is, however, much more to the relationship between the building and what goes on inside.

“During the history of the building, the attitude towards architecture changed. As an artistic direction team, we tried to work with the architecture; to keep it in mind”, says Silvia.  When it was first built, the structure sported a very slender skin intended to integrate nature into the building –a popular modernist quirk of the era. Despite requiring reinforcement later, to Silvia, this strive for transparency and permeability is “a great metaphor for how we understand our work”.

The Haus’s location is also important. “The same institution in Kreuzberg, for example,  would have evolved very differently” Silvia posits. Situated in Berlin’s most developed area, the site is surrounded by architecture, such as the Reichstag and Marie-Elisabeth-Lüders-Haus, that looks with unerring positivity to the future. “The building’s universal, modern context relates very well to our discussions on reclaiming and reevaluating modernity in the context of multiculturalism, for instance.”Germany has a long tradition of public funding of arts, and the HKW is practically completely  federally funded. Indeed, almost all cultural institutions in Berlin –and indeed across the country – receive public money. “Society has decided –over the years, decades and even centuries –that the way they want to create art is through public commissions to artists. This understanding is deeply rooted in the German imagination”.

In Berlin, however, the situation is changing. The ‘free scene’ that emerged as the government pumped money into its new capital’s cultural life has all but disappeared. The plethora of artists living in Berlin have less space, and there is more competition. Rent is rising.  That privileged situation is starting to dissipate, but, explains Silvia, if the city wants to keep its international position as an attraction to artists, it has to develop strategies. As a member of the city’s Rat für die Künste (arts council), which is dedicated to mediating between the public and public policy, Silvia is actively involved in addressing these complex issues.

The Haus der Kulturen der Welt is of international standing and its funding is, thankfully, safe. Yet to Silvia, the bigger picture is also important, for no institution is an island. “Berlin has no beaches, no Roman architecture… What makes the city so appealing is its art and cultural scene, and this has to be kept alive. That’s why we must fight to maintain the diversity that makes Berlin unique, fertile and attractive”.

This article was first published on Slow Travel Berlin in 2012.