Home   /   Is the Anthropocene a Doomsday Device?

Is the Anthropocene a Doomsday Device?

The absurdity of the scene can’t have escaped everyone in the room. There we all were, watching a deeply theoretical and philosophical discussion about 21st century end-of-the-world discourses, while on the other side of the planet, Australia battles bushfires of increasing intensity and actually had to add a new colour to its weather charts to represent an unprecedented 54 degrees. 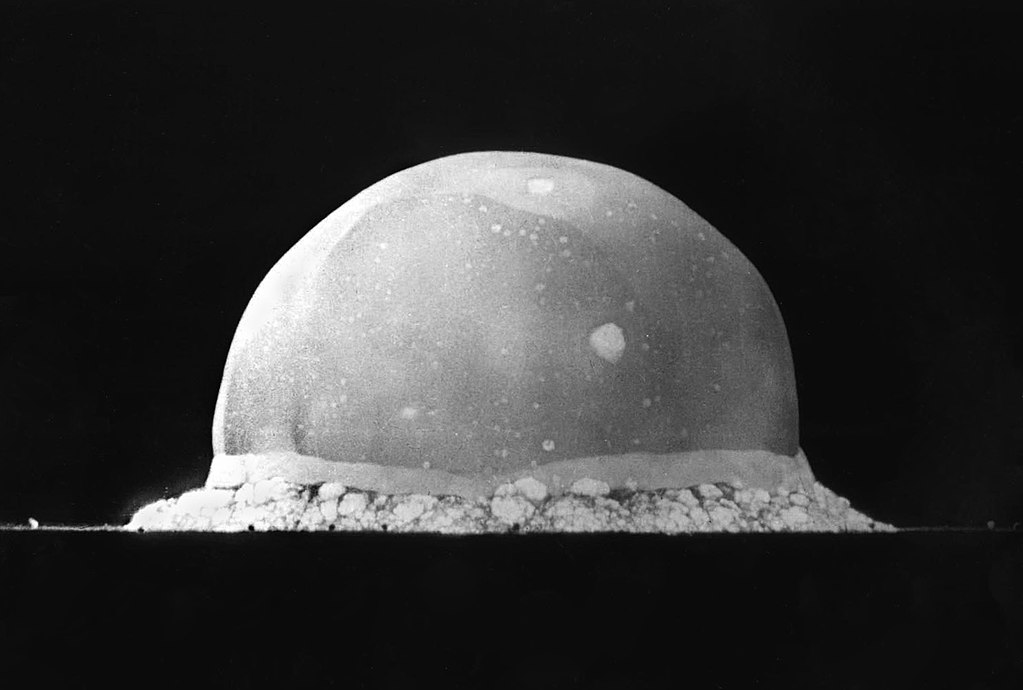 The Trinity Test in 1945 has been proposed as the start of the Anthropocene. Public domain image via Wikipedia.

For those of us huddled in the auditorium of Berlin’s Haus der Kulturen der Welt, with outside temperatures well below zero, and protected by a bubble of intellectualism, the idea of the Anthropocene remains just that — an idea.  It’s testament to the innovative nature of HKW that they’ve taken on the ambitious Anthropocene Project, a two year programme of events examining the Anthropocene thesis, which suggests that humanity has become the driving power behind planetary transformation.

Popularised by Nobel laureate and atmospheric chemist Paul J. Crutzen, the Anthropocene is proposed as the current geological epoch. The theory is based on the notion that “the historically accumulated, planetary environmental effects of an expanding human population, technological innovation and economic development have become inseparable from the Earth’s geo-processes.”

Basically, it seems that we’ve started to view our relationship with the planet very differently. Where once there was a strict dichotomy between man and the environment; culture and nature, the lines are becoming increasingly blurred. This idea is arguably nothing new. When talking about evolution it’s almost impossible to avoid arriving at a point where everything humans have created can be called natural. For a split second it can even seem like a reasonable, even comforting, conclusion – allowing us to wash our hands of responsibility for the fate of the Earth, our fellow humans and ourselves. It’s a theoretical dead-end, of course, which rules out free will and each individual’s capacity to influence the course of their own life, and that of others. Yet this is essentially one of the paradoxes the Anthropocene Project addresses, asking fascinating questions such as “what does it mean for our anthropocentric self-understanding — and by extension, the future — if nature is produced by humanity?”

Beginning with a four-day opening, the project will run intermittently until the end of 2014, and feature a thorough and multidisciplinary examination of the myriad topics raised by the concept of the Anthropocene. Among the packed opening programme, a series of discussions entitled “Is The Anthropocene…?” took place. Which brings us back to the aforementioned navel-gazing, part of a conversation between Claire Colebrook of Penn University’s Department of English, and Cary Wolfe of the same department at Houston’s Rice University, who were there to determine if the Anthropocene is a Doomsday Device.

In an interesting – if perhaps overly academic – discussion, the pair appeared to get stuck on one point and proceed to attack it from a variety of theoretical angles, becoming increasingly abstract to the point of alienating some of the audience. Their difficulty, however, stems from a compelling contradiction: that human narratives are, by their nature, anthropocentric. If the Anthropocene implies a shift in narrative from humans at the centre, to the Earth becoming the focus and agent, we are effectively and unavoidably anthropomorphising the Earth.

As a doomsday device, the Anthropocene initially appears incredibly attractive. The idea that in their attempted mastery of nature humans will become the architects of their own destruction is the stuff of sci-fi’s most popular plots. The word doomsday implies a moral judgement; that there will be redemption – and this is indeed a key facet of any narrative on the topic. In the Anthropocene, though, judgement will not come from without but from within, from the Earth itself as it seeks vengeance for humanity’s destructive reign. Apocalyptic fiction from Lars von Trier’s film Melancholia to Cormac McCarthy’s The Road portrays the end of days as beautiful and redemptive respectively. As humans we will always apply a moral narrative; the outside is always inside.

We now know that the Anthropocene provides plenty of opportunity for omphaloskepsis, but what are the real-world consequences, outside our bubble of theorising and hand-wringing? Colebrook posed some important questions. If the Anthropocene is a doomsday device, will we finally be prompted to do something about it? And if we really manage to turn this difficult conceptual corner, the media will play an important role. At the moment, issues that could – and probably will – lead to the mass destruction of humanity are currently portrayed and spoken about as ‘normal’ problems, referred to in similar terms as the financial crisis, for example. If humans are on the road to destroying the very thing that sustains us, we need to drastically change the way we approach it. And, as those in Australia might tell you today, it seems that time is running out.