Home   /   Science at the Singapore Biennale

Science at the Singapore Biennale

During a visit in the early nineties, William Gibson called Singapore “Disneyland with the Death Penalty”: a sterile, paranoid metropolis whose citizens paid a high price for their spotless, crime-free Utopia. “If IBM had ever bothered to actually possess a physical country”, Gibson wrote, “that country might have had a lot in common with Singapore. There’s a certain white-shirted constraint, an absolute humourlessness in the way Singapore Ltd. operates; conformity here is the prime directive, and the fuzzier brands of creativity are in extremely short supply.” 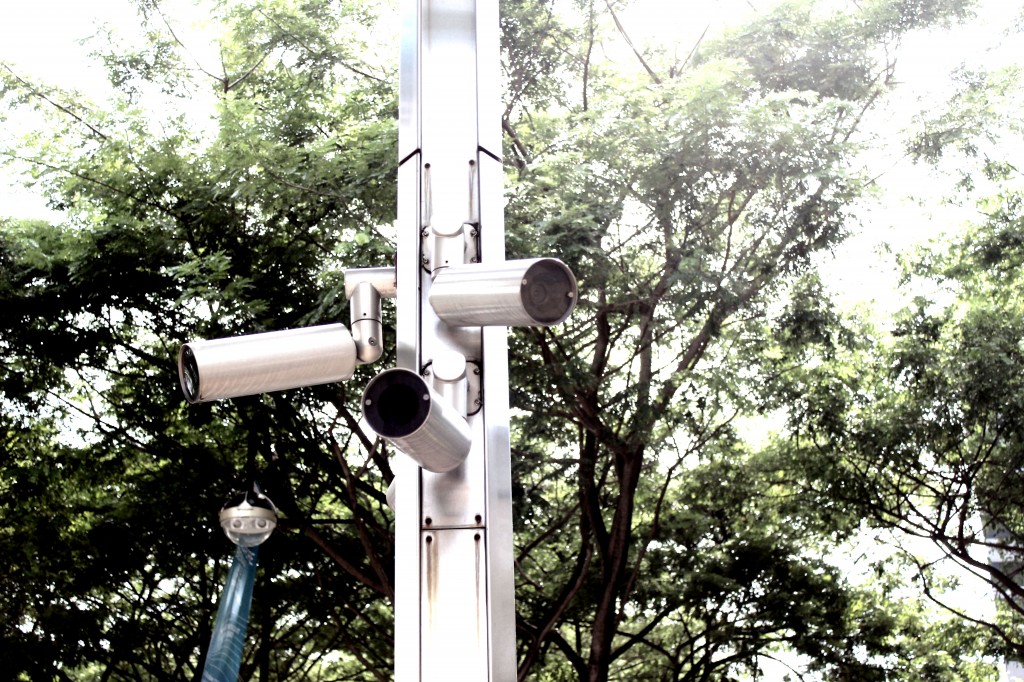 Two decades on, and with only 24 hours in the city state, I might have said that little has changed—were it not for the Biennale that happened to be taking place during my short visit. Superficially, Singapore appears like some futuristic version of The Truman Show, though the cameras here are far from hidden. The Management University campus on Bras Basah Road is seething with diligent students, their enthusiasm tangible and infectious. But across the street at the Singapore Art Museum, something much less expected—that is, if you believe the stereotypes— is taking place.

Running until 16th February 2014, the Singapore Biennale’s title is “If The World Changed” and focuses on artists from Southeast Asia. History and tradition play a key role in the themes addressed, as does the complex post-colonial condition of a cluster of cultures only recently freed from the grip of imperial control. But in doing so, the majority of works look unflinchingly forward, and go some way to explaining why this part of the world is so often synonymous with visions of the future.

A prime example of this fusion of tradition and futurism, and a definite highlight of the event, is a piece called Peace Can Be Realized Even Without Order by Japanese collective teamLab. The sprawling installation features hundreds of holographic dioramas of traditional Japanese musicians and dancers. The characters play their instruments, dance and sing, triggered by motion sensors so that they interact as if by magic with visitors wandering around the space. The use of darkness and mirrors creates an illusion of infinity, where ancient, alien figures create an organic symphony of great beauty.

Elsewhere in the museum, Singaporean artist Jeremy Sharma’s Terra Sensa-Lovell has plotted the data of pulsars–beams of radiation emitted from a dying star–recorded at each decade since they were discovered in 1967. Using high density polyurethane foam, the artist has turned the resulting graph into a 3D slab of peaks and troughs that are at once foreign and futuristic, yet eerily reminiscent of familiar landscapes and ancient artworks.

Working with experts at the Technological Science Institute in his native Malaysia, artist Chris Chong Chan Fui has created one of the Biennale’s most simple yet affective installations. At first sight, his large-scale drawings look like skillful but unremarkable botanical illustrations, but look a little closer and the joke becomes apparent: these are detailed graphical representations of imitation plants. As we enter the Anthropocene, and the boundary between the artificial and natural grows steadily more blurred, BOTANIC is a humourous and hard-hitting comment on our fake plastic world. 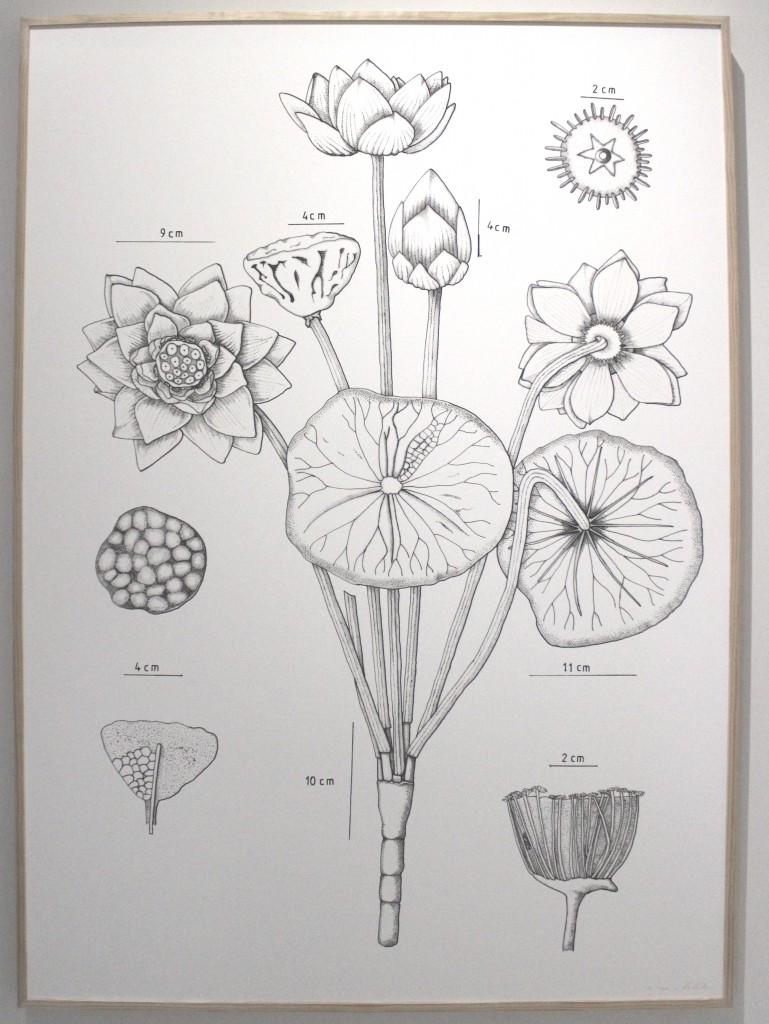 Over the road, the Singapore National Museum is harbouring some secrets of its own. In the foyer, Sydney-based Singaporean artist Suzann Victor inspires awe with an artificially induced  rainbow. 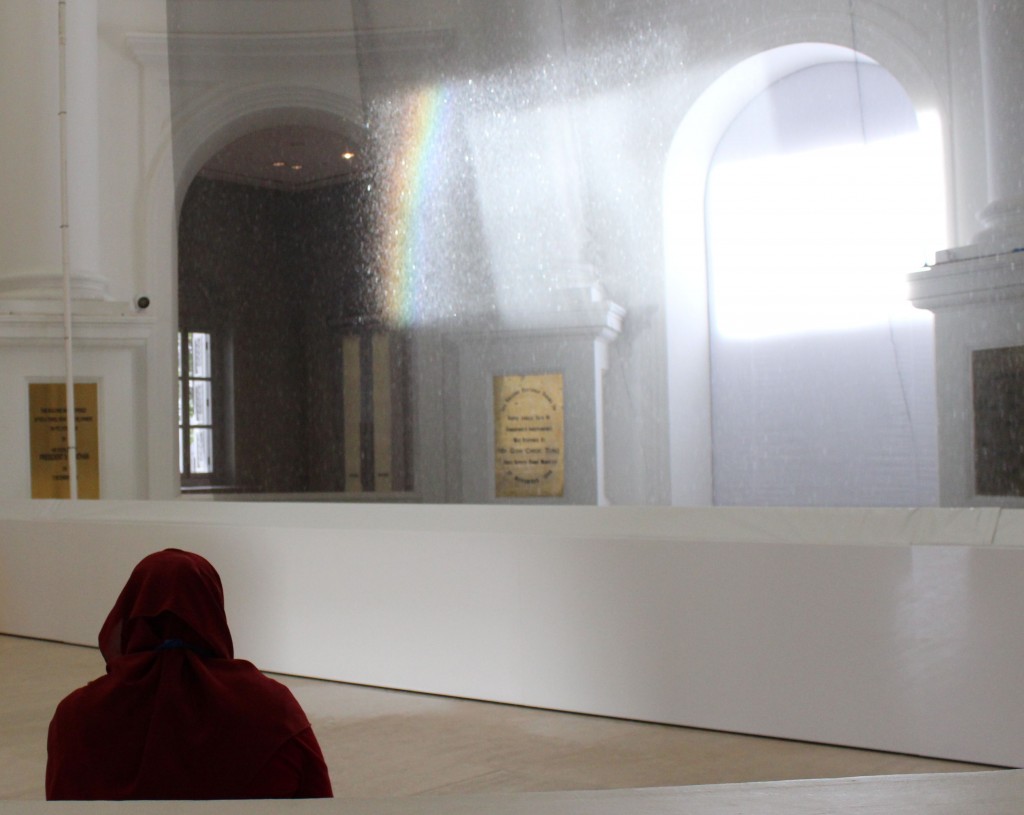 Meanwhile, down in the basement, a pitch-black room is illuminated by 31 ornate antique chandeliers, whose frames have been refitted with uranium glass and UV bulb. Glowing nuclear green with tinges of pink, the lights represent the 31 nuclear nations of the world, with the size of the chandelier corresponding to the number of active reactors of the country it represents. Entitled Crystal Palace, the installation is by Tokyo duo Ken and Julia Yonetani. Nuclear is currently perhaps a difficult subject in Japan, but I admired the artists’ restraint with this piece. For some it may be a comment on the perceived unnaturalness of nuclear power, the fear that it commonly induces, and the costs it incurs. But to me it spoke of aspiration; an acknowledgement that like these adapted antiques, technology–and society–have a long way to go in the quest for sustainable energy generation. Like the best of the Biennale, the neon chandeliers look to the past to comment on the future, uneasily but with a certain optimism; expressing an understanding of the power of technology and the weight of human moral responsibility in its ongoing application.

I leave Singapore inspired and impressed, having discovered so much more about the state, and about Southeast Asia, than one would ever expect during a 24-hour layover. The Biennale may be over in a matter of weeks, but there’s no doubt that the stories it tells will linger for a lifetime.