Home   /   The Piano and the Axe: Redefining Capital

The Piano and the Axe: Redefining Capital

That’s Joseph Beuys. The German polymath was discounted in his time by many as a rambling fool (understandable if you’ve ever seen one of his videos) but is today considered one of the 20th century’s most influential artists. 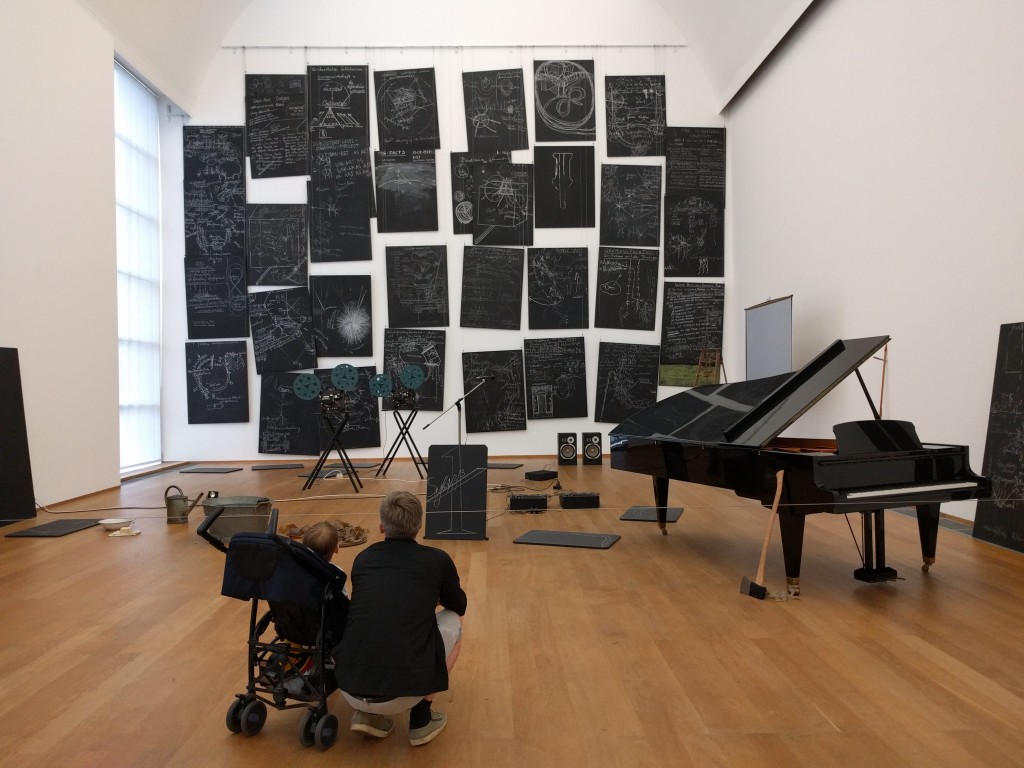 The Hamburger Bahnhof provides permanent home to an impressive collection of Beuys’ artworks. A new temporary exhibition, entitled Capital: Debt, Territory, Utopia, is built around the artist’s Das Kapital Raum 1970-1977 (The Capital Space 1970-1977), originally shown at the Venice Biennale in 1980.

Summing up a decade of intense philosophical and artistic exploration, Das Kapital Raum represents Beuys’ equation, as outlined in the quote above, that art=capitalism. The installation forms the nucleus of an exhibition of over 100 objects that run the gamut of centuries, geographies and media, connected–sometimes obviously, others tenuously or conceptually–to critiques of capitalism as we know it.

The journey starts with Debt, that central facet of capitalism, from the collapse of the tulip trade during the Dutch Golden Age to the financial crisis of 2007. Yet debt can be considered older than money, a fundamental part of the social contract, beginning as soon as we’re born. There’s always a price, right? 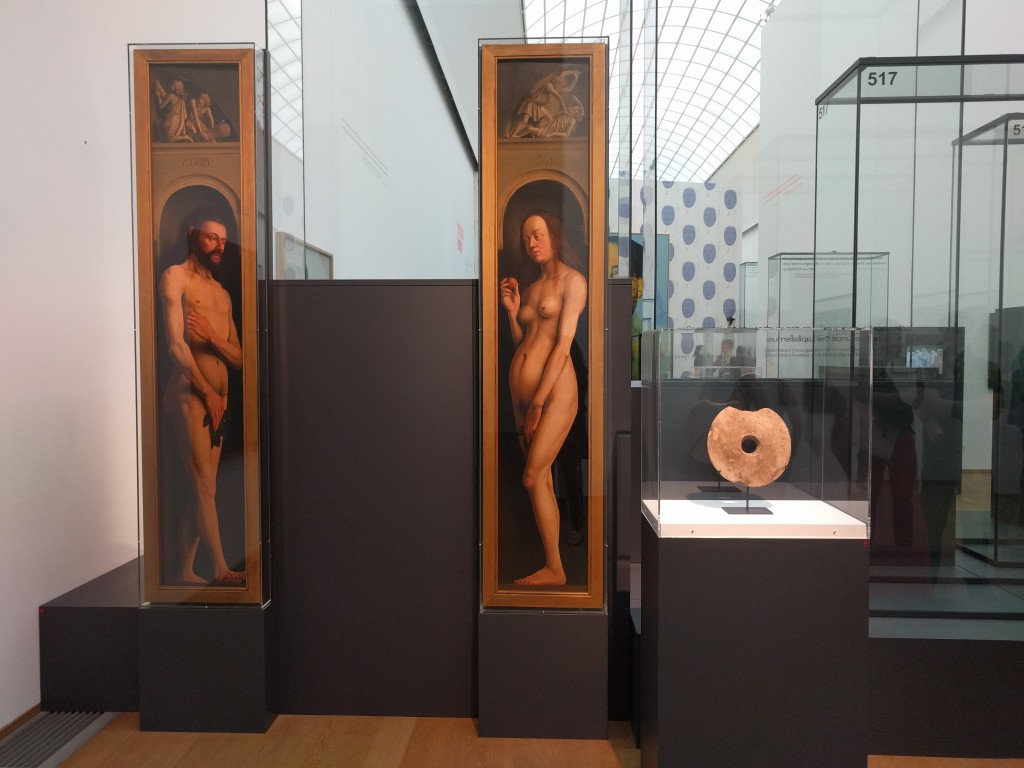 The first few items are representative of the scope of the entire exhibition. There’s a huge Rai stone, Andy Warhol’s Big Electric Chair, a 14th-century Saxon arm reliquary (an ornate container for religious relics), and a recording of Rihanna’s Bitch Better Have My Money.

Another Warhol, a huge technicolour rendition of Chairman Mao, is part of the permanent collection here, and for this show is cleverly juxtaposed with a 7th-century clay sculpture of the Buddha at Sarnath. It was in Sarnath that the Buddha preached his first sermon, putting forward his idea of the Middle Way, between luxury and austerity. Buddhism was a major religion in China until the Cultural Revolution, when statues of Buddha were replaced by portraits of Mao, and followers of the religion likewise “reformed”. 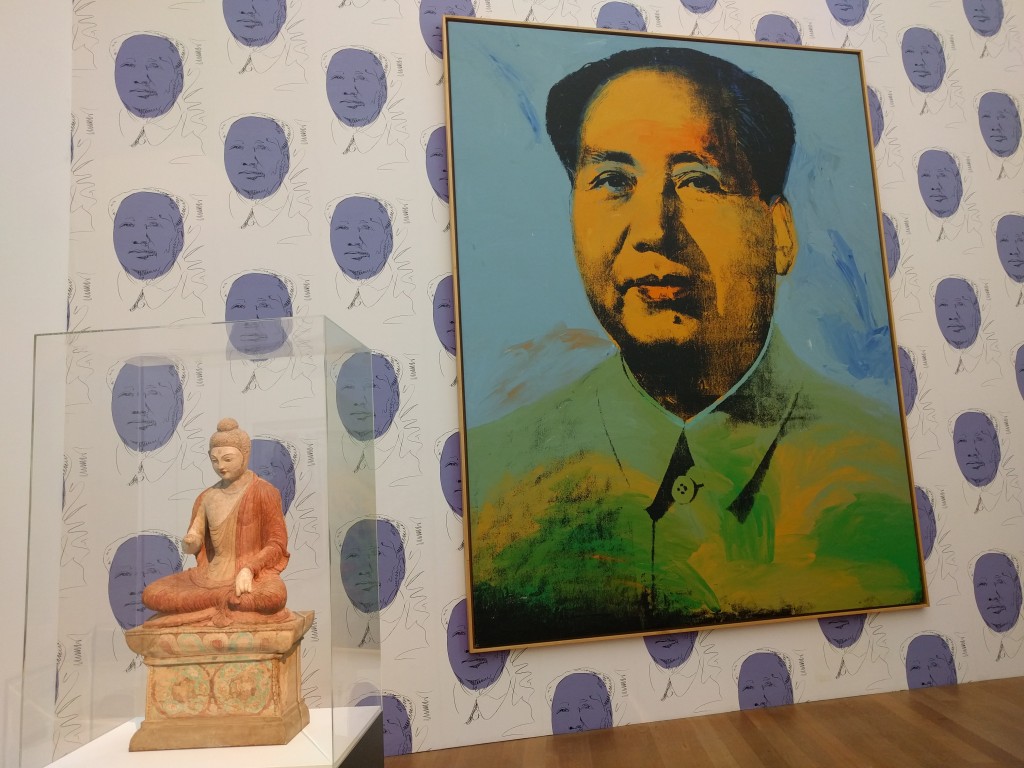 The wall text introducing section two notes that, “unlike purely geographical terrains, [territory] is an arena that constantly has to be asserted and sometimes defended… Above all, it can be associated with the expansive, accumulative dynamics of capitalism.”

Unsurprisingly, then, colonialism in all its exploitative glory is the main defendant in this trial, and the bloody evidence of empire is everywhere.Themes emerge from the disparate objects. Some, like slave contracts and chains, have clear connotations. Other, such as the recurrence of masks and the appearance of donkeys in various scenes and formats, hint at the deception involved in colonial pursuits. But who is deceived in the colonial process? The everyday inhabitants of a ruling nation, to whom expansion is justified through the arrival of exotic goods and a boost to the economy? The native population of a subjugated territory, benefactors of a “civilising” force? Or the colonisers themselves: government officials, missionaries, merchants and capitalists, who deceive themselves with religion and the notion of the “white man’s burden” to justify profiteering from violence and oppression? As for the ass, we might ask ourselves: who are the fools? 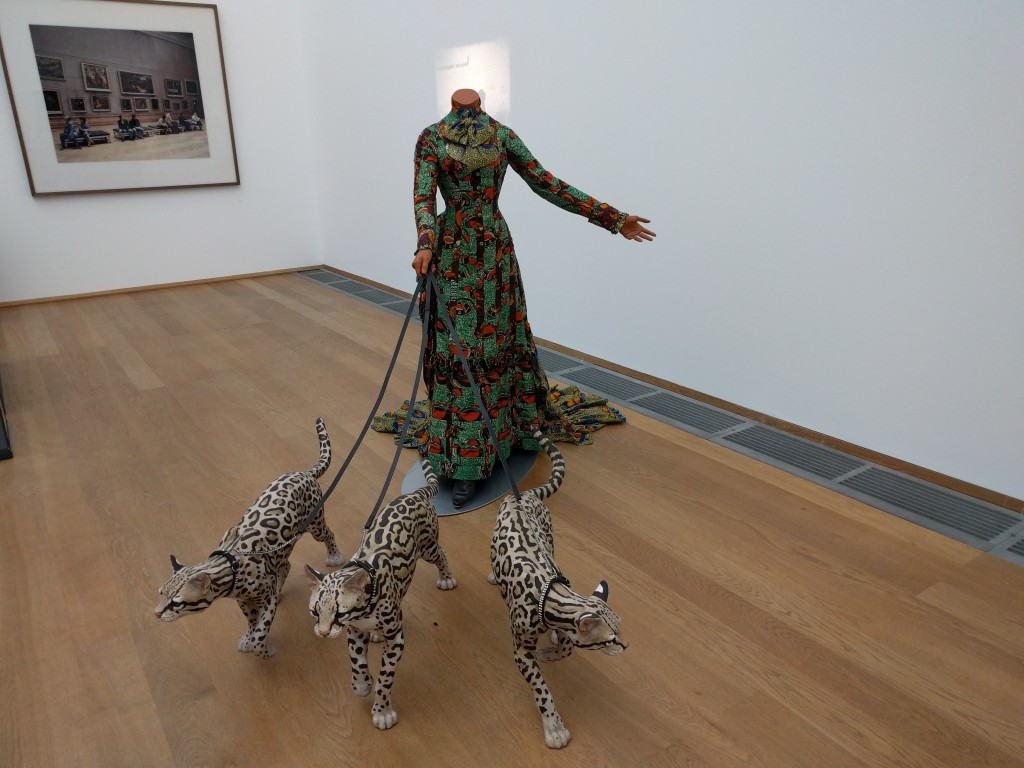 A silver statue of Atlas, Greek god of endurance and astronomy, carrying both the world and and a crowned Prussian eagle on her shoulders…. A portrait of Frederick the Great with his greyhounds… A life-size wax model of a headless woman walking three pet ocelots… The dialogue here has much to say, but leaves plenty open to interpretation. Instead of wall texts for each object, the exhibition provides an accompanying booklet with short descriptions. The soaring walls of this former train station are given over to quotes like:

“The colony of a civilized nation, which takes possession of either a waste country, or of one so thinly inhabited that the natives easily give place to the new settlers, advances more rapidly to wealth and greatness than any other human society.” – Adam Smith, 1776

“Individuals wander along entangled paths, propelled by obscure motivations toward some dimly imagined ends, crisscrossing and colliding as they act out their economic roles.” – Anwar Sheikh, 2016

With the intersecting narratives of runaway capitalism duly revealed (and reviled, make no mistake), the show now turns its attention to the third and final act: Utopia. Das Kapital Raum is the focal point, but first we must prepare ourselves for its revolutionary message.

“Another world is not only possible, she is on her way,” proclaims Arundhati Roy via a 2003 quote from high above. “On a quiet day, I can hear her breathing.”

The complexity of current capitalist systems, so astutely conveyed by this exhibition, can often feel overwhelming. In this huge space, it’s impossible to make a mental map large enough to represent the interconnectedness of it all. How then, if it’s so difficult to understand, can we possibly do anything but surrender, to make like the metaphorical ostrich?

Conventional wisdom dictates that one must know one’s enemies in order to defeat them. Incidentally, the author of this aphorism is Sun Tzu, who wrote The Art of War, a famed book itself referenced within the exhibition, as well as–it’s worth noting–by British politicians in the wake of Brexit. 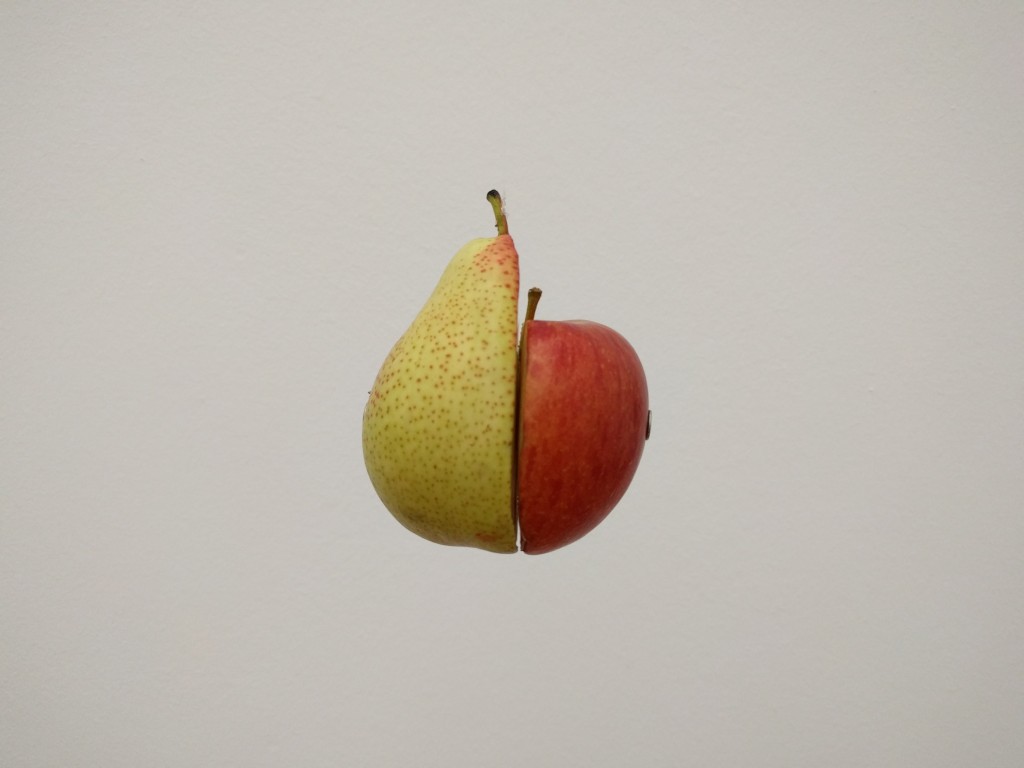 And yet, a new way is emerging from the chaos. “The imagination is today a staging ground for action, and not only for escape,” reads a wall quote by Arjun Appadurai. Nearby, a strange fruit dangles from the ceiling by an invisible cord, half apple, half pear, growing together while steadily decaying. scribbles as rebellious and unsettling today as in 1955 when the artist made them. 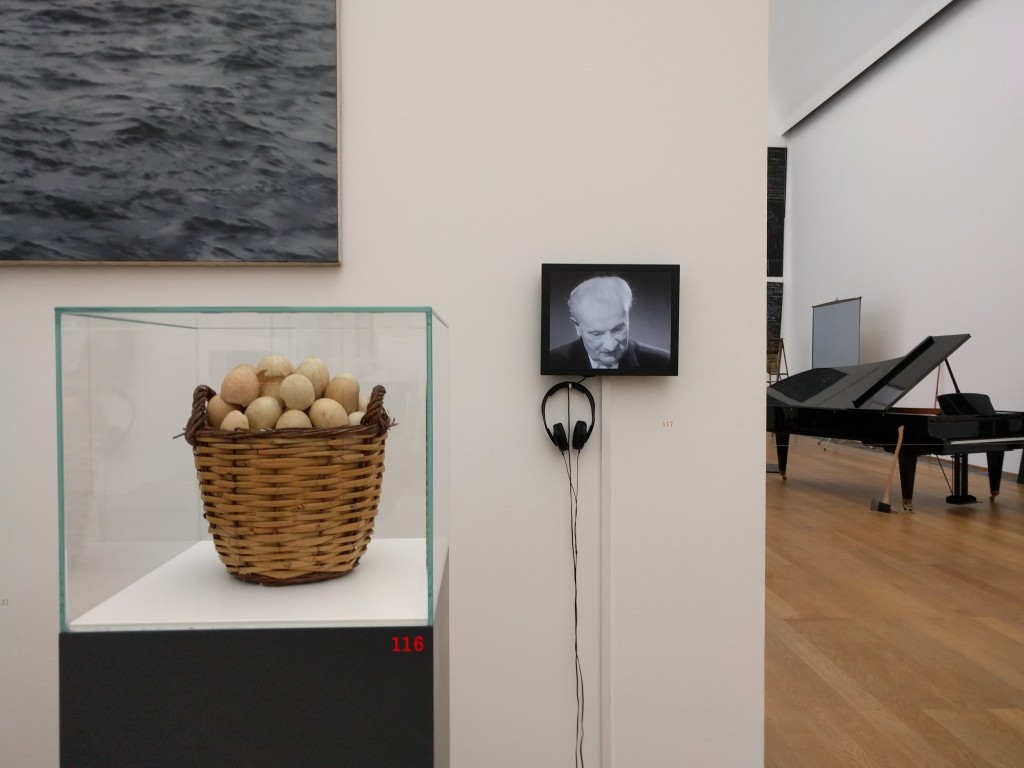 Gerhard Richter’s hypnotic Seestück, an optical illusion that lets the ocean become the sky, provides the backdrop to Marcel Broodthaer’s Baskets with Eggs. “The world is an egg,” the artist explains. “The world is born of the great yolk, the sun. And the belly of a wave is white. A heap of eggshells, the moon. Dust of eggshells the stars. All dead eggs.” Rounding odd this challenging and unlikely trio is a 1964 video of Martin Heidegger in conversation with Thai monk Bhikku Maha Mani. In the interview, the German philosopher criticises Europe for lack of harmony and calls for a new mode of thought. “We do not have any clear, common and simple relation to ourselves,” he notes. “That is the big problem with the Western world.”

This show opened on 2nd July, just over a week after the European project began to collapse with Britain’s vote to leave. Few foresaw the disaster, which makes the experience of the exhibition all the more affecting. With hindsight, however, it feels less like prescient. The far right has been on the rise for a lot longer than a week. Climate change, proxy wars and forced migration… Perhaps, when you make an effort to pull it all together, as the curators here have, the chaos of the now seems inevitable.

If that’s true, then maybe there is some hope after all, because the exhibition’s logical conclusion is Utopia, and Beuys. Das Kapital Raum takes up the entire final hall, sprawling vertically and horizontally in the artist’s characteristic chaotic style. Multiple blackboards litter the walls and floor, and contain Beuys’ workings-out as he deconstructs the notion of capital as money and instead places agency firmly on the part of human creativity. In the foreground, a glistening grand piano distracts attention from the simple axe that leans cajolingly against an exquisitely carved leg.

Beuys was a respected thinker, and spent many years coming up with his ideas about capital. To be clear, he never argued simplistically that art is capital. Instead, he wanted to portray the notion of human creativity as the real generator of value. “Capital,” he said in a 1982 interview, “is only the ability of people employed in their work and in their production.” He goes on to explain…

“I make only art. But this art is a new kind of art. It is social art. So to make it very clear, this is a very important element in the ecological movement to change the social order and to come to a new social body with elements of freedom… so everybody should be equal and in solidarity in an economy. So the ideas of freedom, equality, and brotherhood appear again but with a radically new deﬁnition related to art, ability, creativity and the dignity of the workers in every working place.”

Utopian? Yes. Ambitious? Certainly. But Beuys, always ahead of his time, in some ways laid the foundations of today’s nascent postcapitalist movement. From the writings of Paul Mason to the collaborative World After Capitalism project, new ideas are emerging about how technology and ubiquitous connectivity can drive equality and subvert the current system, built as it is around ownership, a concept increasingly incompatible with the information age. World After Capitalism, for example, notes that:

“What knowledge has already made possible today, by virtue of the industrial revolution and the rise of digital technology, is a society that can take care of everyone’s basic needs and allow us all to contribute to knowledge. Just like the Job Loop powered industrial society, so the knowledge society will be a different process, the Knowledge Loop. Under the Knowledge Loop, someone starts out by learning something, then uses that to create something new, which is then shared.”

Then, in a chapter entitled Enhancing Freedom, the author points out that in order to overcome the limits of existing capitalism and accelerate the digital knowledge loop, three types of freedom are required. Economic freedom in the form of a universal basic income; informational freedom in the form of removing barriers to learning; and, finally and most Beuysian, psychological freedom, wherein we “must free ourselves from scarcity thinking and its associated fears that impede our participation in the knowledge loop.”

Clearly postcapitalist parallels with Beuys’ philosophies exist; and at least some of the disparities can arguably be accounted for by social context: Beuys grew up under Hitler and died just before the birth of the world wide web; postcapitalist discourse is a child of our times: vague, optimistic, and enamoured with the potential of the newborn digital age.

Still, the similarities are striking, especially against the backdrop of this exhibition. Indeed, however you feel about what’s happening right now, it’s hard to argue that the status quo is still intact. Amid the chaos, change can emerge–and in an era of interconnectedness, human capital has never been so powerful. But–and here’s something the postcapitalists can learn from Beuys–if you do decide to pick up the axe and smash the piano, just make sure you know what to make with the wreckage–and how to build it.